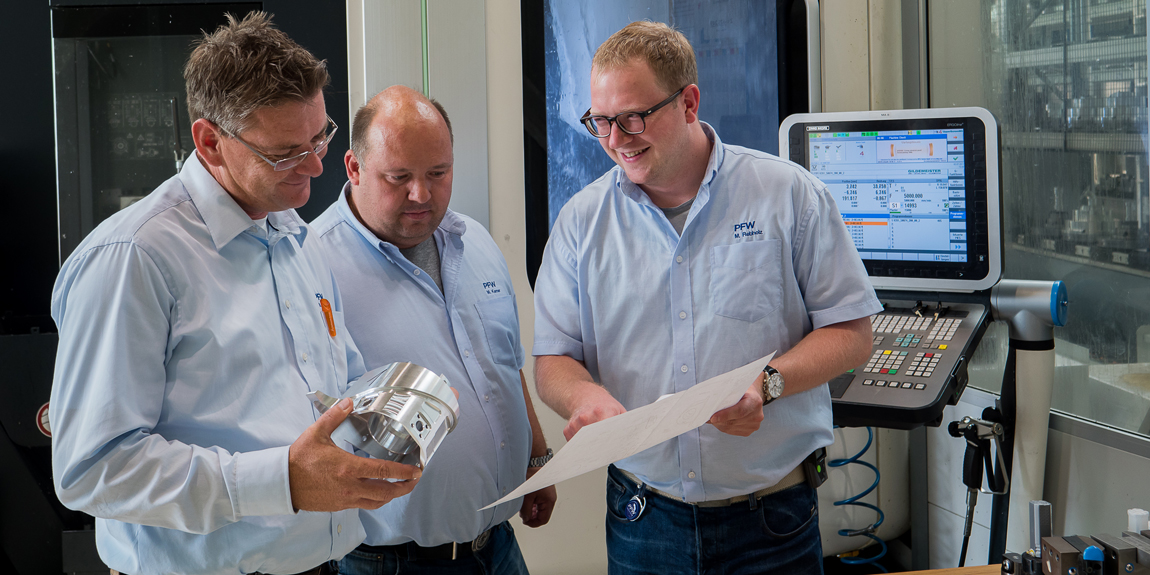 Michael Säubert (left), Head of the Machining Division at PFW, with his masters Michael Kerner (centre) and Max Rebholz.

Over 100 years of experience in the aircraft business makes PFW Aerospace GmbH the oldest European company in the branch. The enterprise, that started out constructing aircraft for the First World War, today develops and produces complete pipe systems for conveying fuel, water, oxygen, hydraulic fluid or bleed air and complex structural components for branch giants such as Airbus and Boeing at its headquarters in Speyer with around 1,800 specialists. Another 400 employees support the work at a location in Turkey. One great mainstay in production is the manufacture of connection elements in fuel systems, so-called connectors. PFW machines these in a highly automated system consisting of twelve DMU 60 eVo linear machines from DMG MORI, three robots and a high-bay storage for pallets with clamping devices.

Twelve DMU 60 eVo linear machines are linked at PFW via an automation from Fastems.

The multitude of pipe systems does not take first priority in the development of an aircraft. Instead the fuel lines have to be laid, for example, between the finished structural elements in the wings. This task is one of the core competences of PFW. The company develops and produces the necessary pipes and connection elements. You will look for standard components here in vain. “Alone the wing of a A350 XWB contains 530 different connectors“, explains Michael Säubert, Head of the 90-strong Machining Division. Airbus meanwhile produces around 8 of the new wide-body aircraft a month, with this figure set to increase in the future. Complexity, high demands on quality and light-weight construction are the features that characterise these connectors. Programming alone takes around 40 hours: “The wall thickness of the aluminium components goes right down to 0.5 mm while all milling takes place from the solid. This adds up to a metal removal rate of 95 percent here.

As all PFW products are safety critical components, each single part is tested for accuracy and possible cracks. “The aim is to identify and eliminate the causes of possible weaknesses in the manufacturing process”, claims Michael Säubert. That is why all parts are numbered and the machining steps completely traceable. An end-to-end process chain is necessary here, from design to machining and on through to quality control, so the production line has been optimised accordingly. PFW has continuously expanded and automated the production of the connectors for the Airbus A350 XWB since 2013.

The high-bay storage has space for 743 pallets.

The machine tool manufacturer DMG MORI and automation experts from Fastems supported PFW with the expansion of the automation. Today there are altogether twelve DMU 60 eVo linear machines integrated in the system. One robot is allocated to four milling machines, which it loads with pallets. Employees move the pallets with the in-house designed clamping devices into the high-bay storage via six loading stations. There is space here for 743 pallets. Production of the complex components takes place in five setups. Michael Säubert goes on to explain how the process is organised: “Each machine can produce every part and the pallets are clamped as required between the machining steps.” Such flexibility is essential with batch sizes of 1 to 6. “The average throughput time of the connectors is around two hours.”

“The machining time of the connectors was the decisive criterion for the investment", recalls Michael Säubert. That is why they sent a reference part to potential machine suppliers. “DMG MORI machined the workpiece fastest in the required quality.” In addition the company already had many years of experience working with the machining centres of the machine tool manufacturer. There are 20 models from DMG MORI in operation in the mechanical production at PFW. “This is, of course, a clear indication of a cooperation that has grown over many years.”

Six employees per shift are required for the operation of the twelve DMU 60 eVo linear machines.

The fact that the DMU 60 eVo linear was chosen for this project was due to its high degree of dynamics. “The linear drives and high rapid traverse speeds play a key role in the short machining times”, says Michael Säubert. The accuracy of the machines is also impressive. “Especially where surface quality is concerned, we have extremely high demands ranging from Ra 0.8 to 3.2.” Another important aspect is chip removal: “With our high metal removal rate chip fall is decisive for a high level of process reliability. Only rarely does an operator need to intervene manually."

The high safety-critical connectors are inspected to 100 percent for accuracy and cracks.

Personnel expenditure for the operation of the system is low when measured against the many workpieces. Six employees load the racks, carry out small finishing tasks and inspect the parts. The complete production is carried out in three-shift operation, currently on five days a week and in future six. Around 5,000 connectors a month are sent off to England from the plant, where they undergo surface treatment before being installed by Airbus.

There are 530 different connectors in the wings of an Airbus A350 XWB.

Michael Säubert draws a positive conclusion after a good year's production on the completely automated system. Setup and finishing times are very short: “And this together with a high level of availability of the entire process makes it possible for us to produce the connectors efficiently and competitively.”

Thank you very much for your interest in our products.
To download our PDF brochures please fill in the form below.